Follow The Good News A Journey Through the Bible on WordPress.com

For Christmas this year I was given a wonderful gift – This gift is the One Year Bible. Each day is a devotion for that day. This Bible will take me through the entire year of 2019. The beginning starts with the creation. So, in order to share with each of you my journey and to being you along with me, I will start with creation and the ancestry of Christ. All of these things were part of God’s plan. He has the big picture.

As I was reading this I was struck by two things I had overlooked many times. Genesis talks talks about the Garden of Eden and the rivers that ran through it. There were four. 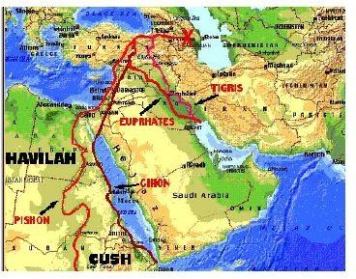 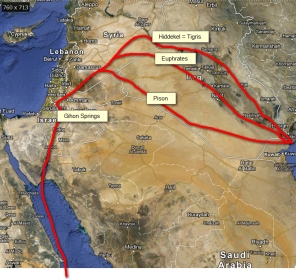 What is interesting to me is when one looks up those rivers, we see they still exist today, even though the ebb and flow has changed over the centuries – yes the garden is underwater, however, we do know it existed. The Bible tells us so and facts prove it. God had a plan.

The second thing I had never been taught in all of my years and had never noticed before hit me like a ton of bricks. The genealogy of Christ is amazing and human. The ancestors were not anything special, they were every day people with flaws and failings, strengths and weaknesses just like we have today. The women, were strong, determined and the backbone of the ancestry.

For those of us who study ancestry to determine where we came from in order to better understand who we are, can appreciate, the fact that in Matthew Chapters 1 and 2 the writer talk about the genealogy of Christ. He spares nothing. He tells us the names of four women who were instrumental in the linage. These four women were not perfect in fact three of them would be considered criminals.

Tamar slept with her father in law

Rahab was a harlot who hid the spies of Israel

Bathsheba was an adulteress whose husband was murdered by King David.

And yet God used these women as vessels to bring forth his son.

God has a plan- he knows the plan even before we are born. He knew Adam and Eve would sin, he knew what these women would do – and yet, even knowing the events would happen, his perfect son arrived.

My point in all of this is none of us are perfect, we all have flaws, we all sin. We have to understand where Christ came from in order to better understand why he came. That includes the Garden, the women and the journey of the ancestors. Imperfect  they were.

Yet, we have a perfect way to our creator. He descended from imperfection.

So take this journey with me. Learn things . Have a greater understanding. Learn that none of us are perfect, however,  we have a perfect way.